Moderated by Ganesh Rasagam, Practice Manager at the World Bank

“The kinds of things that Amazon and Google are doing are impossible in Korea because of regulation.

“If we are looking at potential for growth in infrastructure in the development of new cities and urban communities there is no better place probably in the next decade than Egypt.”

Ganesh Rasagam:  We are going to talk about the policy landscape for competitiveness and what are the new challenges that governments have to think about when framing the competitiveness agenda.

Tae-shin Kwon: The disruptive forces are changing the world at an unprecedented pace and scale and there is rise of emerging markets and urbanization. 95% of Fortune 500 companies are headquartered in the developed economy, and by 2025, 50% of them will be in emerging markets. It means growth moved from developed country to Asia, Middle East and Latin America.  We are seeing disruptive technologies with huge economic impact. Second is the mobile internet and automation of knowledge work. Third are the demographic changes.

Basheer Al-Ghuraydh: We may want infrastructure, red bricks, roads etc. but at the end of the day are we serving that simple citizen in terms of projections we do for internet broadband, infrastructure etc. The demographic dividends entails that we as policy makers, decision makers and especially policy initiatives should be towards the demographic change.

Ashraf Naguib: Egypt has a population of about 80 million people with a growth rate of about 2.4 million people on an annual basis, it uses about 6 percent of its one million kilometers squared.  If we are looking at potential for growth in infrastructure in the development of new cities and urban communities there is no better place probably in the next decade than Egypt.  We are seven thousand years old and unlike a lot of the younger nations around us we have had the opportunity to almost start from scratch.  There is an impact on global climate that can affect some of our bigger cities on the Mediterranean coast. We need a third economic revolution and we are trying to formulate the proper economic fiscal policies that will be able to move Egypt forward within the next century.

Yanos Gramatidis: Greece is a tiny little country in Southern Europe full of treasures and classical antiquities, natural resources, amazing sand and sea and most importantly amazing human capital – all ingredients of substantial competitiveness that could lead to shared prosperity in the society. We believe in the importance of institutions, classical values and traditions that we share with other people and especially with the Arabic world.  And yet the same country has been suffering for decades from devastating clientelism, public governance failures and incompetent leaderships. All these problems led to the current Greek financial crisis with 29% of the population unemployed and 55% percent of them are young people which is really a disaster. Two hundred and fifty thousand young talented people have  immigrated for a better future.  With an ailing banking system, with the obligation of the Greek banks to face an enormous amount of non-performing loans. In view of all these factors Greece back in 2010 applied to IMF and to its European partners for technical assistance and also funding. Such a program includes an unprecedented package of privatization of public assets and services capable of attracting foreign direct investment and creating interesting business synergies. We have even proposed a package of generous incentives immediately applicable to boost the real economy including attractive tax rates, especially for startups and measures to simplify business licensing and fight corruption.

Tae-shin Kwon: To cope with this very fast changing technology, we should have very flexible regulatory system. The kinds of things that Amazon and Google are doing are impossible in Korea because of regulation. To enhance competitiveness without spending money, without giving any tax incentives, without any government budget allocation, we need a regulatory reform.  It means reduce entry barriers, enhance competition and make companies fight each other and make good product with low price, which is good for consumers. In Korea there is too much protection of labourers, workers and farmers. So, regulatory reform is the necessity to cope with this very fast changing world economy trends.

Ganesh Rasagam:  How can global transformations be incorporated in the design and implementation of policies that will improve the lives of the ordinary man?

Basheer Al-Ghuraydh: First, we have to review laws governing the government purchases and tenders.  Second, reforming the contractual classification criteria, which is very important in Saudi Arabia. Third, we have to develop a mechanism that is used to awarding contracting projects. One has to understand, Saudi Arabia, being a rentier state, the private sector does rely very heavily on the state and contracting is one of the ways for the private sector to benefit.  There has to be a mechanism whereby it filters down to the small towns, the provisional governments.  We have had enough of centralization. Finance contracting, even distribution of income, has to be done through a process and this is one the mechanism that should be devised. Fourthly the maintenance contracts rules and regulations should be revised. Fifthly, empowering the national strategy protecting integrity and competing corruption.  The sixth thing is empowering the natural competition council as through that empowerment we have more competitiveness in all sectors and services. Seventh is, empowering competitive supervisor and organizing agency to developing independent capabilities. The most important that we need is increasing the number of judges specializing in competition methods as we are stressing them the implementation and improving of the competition law.

Ganesh Rasagam:  What are the challenges that Egypt is facing in this space and what are the lessons for Egypt as well as for other countries in tackling the competitiveness challenges?

Ashraf Naguib: Some of the challenges that we face in Egypt specifically are our economic and fiscal policy. We are trying to protect an industry that doesn’t exist, for e.g. 300% customs on vehicles while we don’t have an industry to produce vehicles, we assemble. The other issue that we are facing is within our concept of trade.  We are signatories to some of the largest trade agreements, protocols and MOU’s like COMESA, GAFTA, PAFTA, Agadir, the association agreement, Union of the Mediterranean qualified industrial zones et al. But the principle is, that we have a deficit on our trade with basically all of these or under all of these agreements. The purpose of the agreements is to work together with other countries but that does not happen. We need to go back and re-revise some of the causes and terms and regulations of these agreements to fit more with the current situation. Trade is great but since we do not have a vibrant manufacturing sector with the new technologies we are not able to compete with other products. Our products are manufacturing; productivity in terms of quality is extremely low and lacks competitiveness. So, one of the major issues that we are facing is the intervention of government in the market as a participant. We don’t have a competitive edge in terms of either technology or even manufacturing regular products. We need to have an economic revolution understanding exactly what is our fiscal policy.

Egypt is a subsidized economy and are subsidizing your food, water, growth, education and health. But while we have subsidized everything, nothing’s really for free. Education actually in Egypt falls under the corruption index.  Students don’t go to public schools, the teachers don’t teach them because they get meagre salaries and hence they give them private lessons, which the students pay for. Egypt suffers from the malice’s of corruption in government, in private sector, in all levels of society. When we are talking about competitiveness there is absolutely no incentive for anyone to be able to want to become better or to compete because at the end of the day it is the maximum wage that one would get.

Ganesh Rasagam:  What are the new policies and new thinking required to attract more private investments in infrastructure given the challenges that we are facing?

Yanos Gramatidis:  Greece is a country with heavy debt, as a result the capabilities of the government to improve or to create infrastructure are not many.  As a result, we had to resort to the new strategic transformation plan of the country by which we want to change the economic model of the country and make it more open to investment. This was through privatization most of our infrastructure and also other utilities because this is really one of the ways to generate more revenues and the same time to exploit those assets in a better way. The problems that the country had so far were primarily based on the fact that the state never managed its own resources and assets usefully and profitably. It is privatization of airports,  mariners, ports  etc. In PPP’s, we found that it is another very useful tool in order to exploit public assets and also for the government to not to get involved in funding of projects of infrastructure and actually of improving the disabilities of utilities. We have made a new regulation on Private-Public Partnerships which in fact has taken into account two things. Firstly, it should be conceived in the best possible way from the part of the citizen who would have to believe that this change is to their own benefit which is extremely important. Secondly, we had to satisfy the needs of the investors because they want to maximize their profits and you have to create such conditions, tendering conditions and prerequisites that would actually guarantee a successful return of their investment.

Ganesh Rasagam: What would be the single policy change to improve your relative competitiveness position?

Ashraf Naguib: It is the balance between government that does a job, private sector that understands what it has to do and looks for it profitability and civil society.  Conflicts hinder competitiveness. Egypt needs an investment of about $20 billion for us to be able to remove over 23 million minds that are still scattered around the western deserts of Egypt. That on its own is hindering our progress and our development in an area that is full of natural resources, and a potential for new urban communities and cities.

Tae-shin Kwon:  It is time, when the government does not choose which company does the business but its companies who chose where to do business. We should make every country better place to do business by regulatory reform, labour reform etc., which are the key issues to enhance competitiveness.

Next Disruptive innovation for climate change adaptation in developing countries 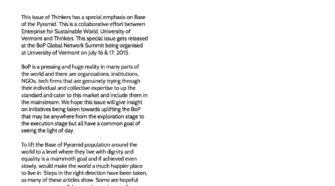