Businesses and brands that will be recognized, loved, and chosen in the long term are the ones that create genuine value for all stakeholders.

“Entrepreneurs can be made to see anew that the sole objective of businesses is not only to make profit but also make a difference to the lives of people in the process.”

“When looking at examples like Amul we can imagine a world where companies who do the good can make the most money.”

Ask any successful business person and they will tell you with a gleam in their eye how their business was born. It follows a familiar storyline of fighting against odds, staring at the prospect of failure and then eventual success. They will tell you how one had to be shrewd in managing costs and price intelligently to maximize profits.

Today the central motivation at the heart of most businesses is built around this creation of ‘profit’. Profit is never a given, it has to be wrested and squeezed out. It has to be ‘taken’. Greed is good it seems, when it comes to running a business. Formidable thinkers like Milton Friedman cemented this belief when they postulated that the only legitimate responsibility of a businessperson is to maximize “shareholder value”. This is now enshrined as the Wall Street ethic.

This core belief that profit has to be extracted at any cost; transforms managers into joyless and helpless takers who are forced to adopt selfish ‘taker’ behaviors like  “put your agenda first and care only about yourself”, “compete for the biggest part of the pie and extracting as much value as possible” and “focus on maximizing short gains and profit”. Businesses are born to ‘take’.

There is another nobler way to make profits. Mandela had famously said that if people can be taught to hate, then they can also learn to love, because love comes more naturally to humans than its opposite.

Entrepreneurs can be made to see anew that the sole objective of businesses is not only to make profit but also make a difference to the lives of people in the process. And importantly that profits and positive societal impact are both possible.

We call this the dare to care way for more meaningful growth and went out in search of a handful of “dare to care behaviors” that can turn the idea of “giving while winning” into a reality that people can enact.

We see business managers’ not as helpless puppets manipulated by the force of profit making but as happiness generators that bring happiness and well being to communities through their impact as well as happiness to their company through earning profits.

This is possible by replacing the ‘taker’ behaviors with 3 high leverage ‘giver’ behaviors:

Serve the agenda of others: choose a fight that matters

Amul is a unique Indian brand to seek inspiration from in this regard. The story of Amul began in 1946 – at the height of India’s freedom movement. Inspired by the mood and atmosphere of the time, a group of dairy farmers in the small town of Anand, in Gujarat state, decided to take action against a local trade cartel that was buying milk from them at exploitative prices and selling it at substantial profit. The farmers approached one of India’s great patriots and freedom fighters in the region, who advised them to get rid of the middlemen and form their own dairy co-operative. Encouraged by support from the highest levels, the farmers went on strike and refused to supply milk to the cartel.

The farmers then went ahead and formed their own co-operative called Kaira District Co-operative Milk Producers Union Ltd., beginning with just two villages dairy co-operative societies, handling 247 litres of milk. The co-operative model was simple but remarkable.  A cooperative society was set up at the village level, where every dairy farmer, big or small could become a shareholder at a nominal subscription. Milk was to be collected once or twice a day at a village collection centre to minimize transportation costs. Farmers were paid by the quality and quantity of milk, which was directly supplied, to the Bombay Milk Scheme, circumventing the exploitative middlemen.

This was the origin of what eventually became the well-known ‘Amul’ brand.

Focus on growing the pie to serve many, and engage many to grow your part of the pie

The founders of the Kaira Union spread their campaign across other villages. Slowly, as word spread more villages joined the Union and a dairy plant was commissioned to process the milk and market the milk to neighbourhood towns and bigger cities. The movement spread to other districts and societies sprung up everywhere. Today 3 million farmers in Gujarat are owners of what was popularly called ‘Amul Dairy’, producing packaged milk, cheese, butter, chocolates and a wide variety of other related categories.

In 1950 Dr. Varghese Kurien was hired to professionally manage operations. Realising the importance of branding and marketing the ‘Amul’ brand was created, derived from the Hindi word ‘amulya’ which means ‘priceless’, symbolizing the pride of a home grown brand created ‘by the people’ and ‘for the people’.

Amul’s popular advertising campaigns are a reflection of their ‘giver’ approach. Its ads typically address day-to-day social and political issues with tongue in cheek humor. Despite encountering political pressure on several occasions, it has not backed down from addressing some ‘uncomfortable’ issues such as commenting on the Naxalite uprising in Bengal and its opposition to the Supreme Court of India ruling criminalizing homesexuality in India.

The third vital behavior of successful giver brands is that they build long-term relationships and create a healthy eco-system of stakeholders.

Amul’s story does not end with a grassroots movement in one state. Its founders wanted to spread and replicate the success of the ‘Anand Pattern’ in other parts of India. The country’s National Planners gave the ‘go ahead’ to Dr. Kurien to set up an apex body called the National Dairy Development Board to implement the ‘co-operative’ model in all Indian states. In 1970 ‘Operation Flood’ was launched aimed at making the country self sufficient in milk production.

Today there are around 176 cooperative dairy unions formed by 125,000 dairy cooperative societies comprising 13 million farmers on the same pattern, who are processing and marketing milk and milk products profitably, be it Amul in Gujarat or Verka in Punjab, Vijaya in Andhra Pradesh, Milma in Kerala, Gokul in Maharashtra, Saras in Rajasthan or a Nandini in Karnataka.

To further inspire the world Dr. Kurien commissioned a notable Indian film- maker to tell the Amul story in a movie called Manthan. Over five lakh rural farmers in Gujarat who contributed Rs. 2 each to its budget financed the film.

Upon its release, these farmers went in truckloads to watch ‘their’ film, making it a commercial success. Manthan was chosen for the 1977 National Film Award for Best Feature Film in Hindi.

Dr. Kurien also set up the Institute of Rural Management (IRMA) to train management graduates to professionally run rural based enterprises. The cooperative pattern has been further replicated with oilseeds farmers and horticulture producers.

When looking at examples like Amul we can imagine a world where companies who do good can make the most money, a world where people who give are successful winners, a world where people uphold the simple belief that generosity pays, thus creating shared value for each stakeholder in the eco system. When we look at ourselves as private people we do believe in the generosity of giving. As a parent we believe in endless love and nurturance to grow our children, as community members we believe in serving the good of the larger whole, as consumers we want to buy brands from companies that symbolize fair and sustainable production and business practices, as an employee we want to work for a company with a honest, respectful and fair corporate culture where we feel valued for who we are and the contribution we make. Since the striving for giving is innately more dominant in us as human beings than the striving to selfishly take, it gives us hope that more and more businesses and brands will apply this human logic to the way they function.

Joyshree Reinelt is a co-founder of Innate Motion and enjoys to work around the globe. Starting out as a clinical psychologist, she soon saw her calling in transforming business clients to apply more human logic to business instead of too much business logic to humans. She believes that only those companies with a shared purpose will earn their right to exist in future. 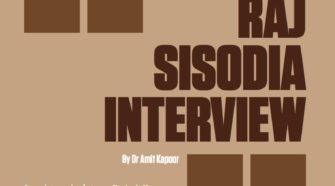