“Transformation twenty-first century style is not a programme nor an initiative.”

The standard management tools to bring about organisational change remain rooted in the industrial era. But, in a world where change is constant and unpredictable, a simple process to manage change as a one-off event feels overly formulaic, providing a false sense of order and security in a disorderly and insecure world.

In response, it is becoming clear that our appreciation of how change works in organisations and how it can be brought about also needs to be changed.

Take Microsoft.  In February 2014 the company announced that its new CEO was Satya Nadella. Since his appointment Nadella has challenged how Microsoft gauges its success.  Revenues and profits are all very well but they are always by their very nature historical, lagging indicators of performance.  Nadella suggests that “customer love” is the leading indicator of success. Nadella sees his job as converting Microsoft employees to this view of their role in the commercial world.  He is the tone-setter.

What is amazing is how quickly the tone of the company and its very culture has begun to shift. Within a comparatively short space of time, it has become more collaborative.  Having an iPhone is no longer a crime. Indeed, the company has partnered with Apple and Salesforce.com, among others.  Previously, Microsoft gobbled up new tech companies, digested them and that was often the last ever heard of them.  Collaboration was seen as weakness. Competition, internally and externally, was fierce and unforgiving.

“You could say that the cultural transformation at Microsoft has replaced fortress walls with a porous membrane: a dynamic relationship between the company and the markets it serves, because that is the only way companies stay young and relevant,” says Margaret Heffernan, author of Beyond Measure (2015) and Wilful Blindness (2011) – as well as being a mentor and board member of Merryck & Co. in Europe.

“The leaders must be constantly aware that change can be ignited by apparently inconsequential behaviours.”

Transformation twenty-first century style is not a programme nor an initiative.  It is not focused on churning out ever-greater profits (though, clearly, profits are essential).  Instead, it is focused on culture, changing how people behave individually and collectively.  The leadership capabilities to deliver long lasting transformational change are as broad ranging as they are challenging:

Provide purpose-giving measures of success: Microsoft has clearly shifted notions of what constitutes success for the company. Financials are not only one-dimensional and unmotivational, but always historical.  Change has to be ignited by a sense of purpose.  This is the work of leadership.

This flies in the face of accepted business practice which is often built on using internal competition as a motivational tool.  Colleagues are actively encouraged to compete against each other.  The most striking example of this is the popularity of what is somewhat euphemistically called the “vitality curve”.  This is a grading system in which the bottom-most performers are asked to leave the organization. Estimates of how many corporations use such systems vary but range from 12 to 60 per cent of Fortune 500 companies.  Microsoft abandoned its approach along similar lines in 2013 and others (including Adobe and Ford) have followed suit.

Set the tone, constantly:  Michel Van der Bel, chief executive of Microsoft UK, argues that leading transformation must begin with the individual leader.  They must demonstrate – every day – an appetite for change.  They set an example of what change entails and demands.  This was always the case, but thanks to technology and the media, leaders are in the spotlight as never before.  This requires an authentic, consistent and open response.

A corollary of this is that leaders must be constantly aware that change can be ignited by apparently inconsequential behaviours.  As the rise of behavioural economics, books such as Nudge, and a host of sporting examples have proved, small changes can add up to substantial shifts in behaviour and performance. Given time evolutions create revolutions.

Tune-in: And key to this is a willingness to tune into the context of the company.  Leaders have to engage with employees, customers, suppliers, and other stakeholders as never before.  They are constantly curious ambassadors rather than order-givers and speech-makers.

Living with and leading within a particular context is a subtle art. The best leaders are able to fit in without seeming to do so.

It is interesting to ask CEOs and other leaders how they spend their time and how much time they spend talking with customers and colleagues.  The most impressive tend to be those who work hard at tuning in. They are constantly connecting and communicating.

Open to new ideas:  This curiosity-led quest to understand the context inside and outside the company is accompanied by an open-mindedness. “Good planning, execution and analysis were once key.  Now our ability to plan has been challenged by our inability to make predictions.  Because of complexity the window for prediction is short.  This means organizations have to think of how they can be more flexible, responsive and adaptive so they can change all the time. This requires different attitudes and aptitudes.  Everyone, suddenly is in R&D and market research,” says Margaret Heffernan.  Companies will only be open to ideas if their leaders are open to ideas.

“I am always encouraging people to read.  Information is out there,” continues Heffernan. “Of my mentoring clients half are avid readers.  If you read, you keep learning.  It makes you open.  Increasingly leaders will have to keep themselves on top of what’s happening in the world.  They need to have omnivorous curiosity, talking to people, reading.”

Consider Oceanspray, an agricultural co-operative owned by over 700 cranberry and grapefruit growers in North America.  Such co-operative ownership is frequently cited as an element in creating highly motivated and adaptive cultures.  It is, says Margaret Heffernan, part of “a move away from the industrial idea of production to a much more organic idea of production and organisation”.

Or Arup which describes itself as “an independent firm of designers, planners, engineers, consultants and technical specialists”.  Among thousands of global projects, it has worked on the Sydney Opera House, Channel Tunnel, the Centre Pompidou, and the recent $888 million update to New York’s Fulton Center.

Key to Arup’s approach is multi-disciplinary co-operation. Arup has a unique ownership structure in which the organisation is held in trust for its employees. It doesn’t have the usual performance measures nor a policy on progression.  Arup is built on a foundation of collaboration both internally and externally.

Open to debate:  The perfect boardroom should echo with the clash of corporate rams – young and old — butting up against each other in constructive intellectual combat. A fundamental role of leaders and leadership teams is to encourage debate and resolve conflict.  The best organisations thrive on argument.

Debate and discussion are frequently and surprisingly difficult to find in organisations.  “Often, leaders – especially senior ones – fail to seek information that makes them uncomfortable or fail to engage with individuals who challenge them.  As a result, they miss the opportunity to transform insights at the edge of a company into valuable actions at the core,” says Hal Gregersen of MIT’s Leadership Center.

“Cultures of silence, fear and denial are common to virtually all failed corporations.”

Gregersen cites the observation of Ed Catmull of the movie-maker Pixar who says, “a hallmark of a healthy, creative culture is that its people feel free to share ideas, opinions and criticisms”.  At Pixar Catmull introduced the idea of a Braintrust.  This is a place where ideas can be shared openly and honestly in an effort to solve problems.  This has four rules: no-one can over-rule the director; conversations are peer-to-peer; everyone shares a vested interest in each other’s success; and honest notes should be given and taken.

The perils of not giving people such opportunities are significant and obvious.  Cultures of silence, fear and denial are common to virtually all failed corporations.

“The risk of being blindsided is enormous.  Leaders need to surround themselves with people who challenge them,” says Margaret Heffernan. “One of the hardest things about leadership is being surrounded by people who tell you what you want to hear.  This is an age-old issue.  I work with CEOs who work hard at igniting debate on the board and throughout the organisation.  It is fantastic when you see docile leaders springing to life.”

What all this means is that leading change is not a solo activity.  It still needs to be led by individuals.  It still needs to be championed.  But, increasingly, change is a team or group activity.  “It is a different model of leadership,” says Margaret Heffernan. “We have had the period when there were global searches for superstars CEOs. That failed.  What we need now are inquisitive, outward looking, leaders who engage with people and ideas inside and outside their organisations.”

Previous Leading Thinkers in Economics and Governance for 2017 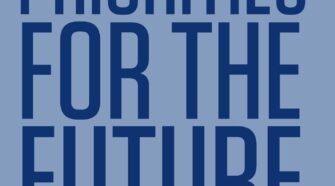