Where you are going and how you intend to get there lies at the heart of management and leadership.  Strategy is the intellectual and inspirational lifeblood of organizations. Working with the Brightline Initiative, Thinkers50 highlights eight original strategic minds:

Weiru Chen is an associate professor of strategy at the China Europe International Business School, where he teaches industry and competitive analysis, business model innovation, and strategy. He is the author (with Cho-Hsuan Yu) of Platform Strategy: Business Model Revolution, a Chinese bestseller based on a study of 40 Chinese firms and 20 global companies.

The Bakala Professor of Strategy at the Tuck School of Business at Dartmouth College, D’Aveni is the author of a number of influential books including Hypercompetition (Free Press, 1994), Beating the Commodity Trap (HBR Press, 2009) and Strategic Capitalism (McGraw-Hill, 2012). His forthcoming book, When Titans Rule the World (Houghton Mifflin Harcourt, 2018), builds on his HBR article “3-D Printing Will Change the World,” and charts the rise of “panindustrial” manufacturers.

Indian-born Pankaj Ghemawat is the professor of management and strategy and director of the Center for the Globalization of Education and Management at the Stern School of Business. He is also the Anselmo Rubiralta Professor of Global Strategy at IESE Business School in Spain. He is the author of World 3.0: Global Prosperity and How to Achieve it (HBR Press, 2011) and The Laws of Globalization (Cambridge, 2017).

On the faculty of Columbia Business School since 1993, Rita McGrath is the

author of The End of Competitive Advantage (Harvard, 2013).  She is also co-author of MarketBusters: 40 Strategic Moves that Drive Exceptional Business Growth (HBR Press, 2005) and The Entrepreneurial Mindset (HBR Press, 2000). Her next project, tentatively entitled “Discovery Driven Advantage” examines how companies can build true proficiency in innovation.

The former dean of the Rotman School of Management at the University of Toronto, Martin is the Institute Director of the Martin Prosperity Institute at Rotman where he holds the Premier’s Chair in Productivity and Competitiveness.  He is the author of nine books including Getting Beyond Better (with Sally Osberg, HBR Press, 2015), Playing to Win (with AG Lafley, HBR Press, 2013) and Creating Great Choices (with Jennifer Riel, HBR Press, 2017).

Yves Pigneur is a Belgian computer scientist and Alex Osterwalder is a Swiss consultant, and founder of Strategyzer. They are the authors of Business Model Generation (Wiley, 2010), which has sold more than one million copies in 30 languages. They invented the “Business Model Canvas,” used by companies worldwide.  The original book has been followed by Business Model You (Wiley, 2012) and Value Proposition Design (Wiley, 2014).

Hungarian-born Tilcsik is an assistant professor of strategic management at the Rotman School of Management and a faculty fellow at the Michael Lee-Chin Family Institute for Corporate Citizenship. In 2015, he and Chris Clearfield won the Bracken Bower Prize from McKinsey and the Financial Times, given to the best business book proposal by scholars under 35. The book, Meltdown: Why Our Systems Fail and What We Can Do About It is forthcoming (Penguin, 2018).

Previous Agility for the Strategist: the Slo Framework

Next Thinkers50 in 50 Seconds | Aaron Hurst

Working Fearlessly in the Face of Wicked Problems 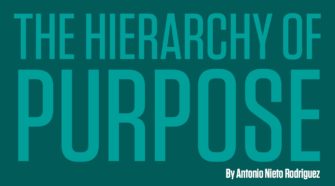