Stuart Crainer shares his experience of crossing the Atlantic on a 38 foot yatch.

Recently I spent 23 days in the company of four other middle-aged men on a 38-foot yacht crossing the Atlantic Ocean.  Since returning, people have been asking me what I learned along the way.   It is interesting – and a relatively recent phenomenon – that you are expected to learn something in any unusual experience.  The experience in itself is not enough, you have to actively have learned something from it.  As one of my crew mates (a CEO as it turns out) observed: “Twenty odd days on a boat in the middle of nothingness and I still haven’t figured out the meaning of life.”

You do, of course, learn things in any 23-day period in life and on a boat in the middle of the ocean.  But the process of learning is as ad hoc as it normally is, learning is gradually acquired rather than arriving in dramatic and sizeable lightning bolts.  Learning happens and evolves.

It is your willingness to accept and embrace the slowness and granularity of the process, which is key.

This also applied to the brand of leadership I encountered while on board.  The captain was a former headteacher.  His modus operandi was to allow you to give something a try and then intercede with some helpful advice as the rope failed to move, the sail continued to flap or the gas didn’t ignite.

Good theory, but it is amazing how challenging that approach actually is.  It feels like low key, educational leadership, but for the person being given the opportunity to try something and, in my case, almost certainly fail to do it, the pressure is intense.  I could feel the faith he was putting in me every time.  I wanted to be able to do it.  And I could feel the spectre of failure hovering.

The truth is that I am not used to failure.  My adult life has been spent deliberately putting myself in situations where I can utilise the skills and insights I have.  It is good, I know, to get out of your comfort zone. But that is not how most people spend their personal and professional lives.  You don’t want to be the one person who can’t do something, you don’t want to repeatedly get things wrong, you don’t want to fail – especially in front of others.

Our captain’s leadership also had an interesting safety mechanism.  When it was suggested that he might do something – let a reef out so the sail was bigger and we would go faster, put the genoa up, change tack and so on – his reaction was often to say no.  “Good idea, but let’s wait 20 minutes and see what the wind is doing then,” he would say in a positively-negative tone honed in the classroom.

When he would say such things, we would glance at each other, roll our eyes slightly and think to ourselves that the captain was a great guy but not a fearless and quick decision maker.

We were, of course, wrong.  Time after time, after twenty minutes the situation was completely different from the one we had imagined.  Taking a reef out or putting a sail up would have been ill advised and sometimes dangerous.

Partly this was down to experience.  The captain had been in more similar situations so he was able to make the right call. But, more importantly, the captain repeatedly got decisions right because he pressed pause and went with the status quo while he weighed things up.

Of course, the natural suspicion is that this brand of slow leadership wouldn’t work in the fast moving corporate world. But, the weather changes very quickly in the ocean.  Before making any decision, a leader is well advised to press pause and consider whether the change will definitely improve performance and to consider the motives of those advising change.  Slow leadership is often the quickest way forward.

Previous In Conversation with Lee Newman

Next Book Extract: The Base of the Pyramid Promise 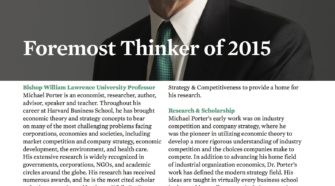