The ability to see challenges as opportunities and not problems is an essential quality needed for entrepreneurs in India.

“I gave myself three months to learn the ropes and started traveling to every street, trying to tap the thriving unorganized market, where publishers/ distributors lived, only to realize that there are way too many streets like that in India.”

“When an entrepreneur looks at his industry, he does not let the amount of work which has already happened before him overwhelm him. He sees the huge gaps which are still to be filled and the innovations that will always be welcomed.”

Before I became an entrepreneur, I thought my work-station at a Fortune 500 company was the best I could have carved out for myself after four years of engineering and an MBA. Even though it was not a sophisticated glass-clad workplace one would find in the imposing niches of DLF Cyber City in Gurgaon or Bandra-Kurla complex in Mumbai, it was my own cubicle nonetheless. It was a cubicle in a steel plant at the most significant mining district of India – Bellary.

Vis-à-vis my batch-mates from MDI, for the first few weeks, I felt chuffed and blessed to be at that sought-after position. Wherever I looked, there were systems and methods, discipline and structure. I was finally living the hectic corporate life I had grown up hearing about from seniors and mentors.

But, something started snapping. Eventually, the evenness and the unsatisfactory tenor of the profession started taking toll. Then onwards, almost every morning I would reach office, look at my work and tell myself the same thing – I can do better.

So one day, in the year 2011, at twenty four years of age, I decided to not subdue that ambitious part of me anymore. Rock steady and unshakably cool, I woke up and succumbed to the entrepreneurial bug in me: I resigned from my job.

Along with seeing me back in Delhi, my parents also saw crashing the two principal dreams they had about their son– of being a flat owner and a husband.

I didn’t have any entrepreneur friends at the time when I resigned, but I had read a lot of stories. Everybody unanimously claimed that it was difficult. Contrary to how glamorous the word sounds, entrepreneurship I knew would be difficult.

I decided to roll my sleeves and throw back the question– “how unusual can it get?” at people who tried to intimidate me. It’s been two years since I started treading on this unusual path and nothing can get you an answer better than actually being an entrepreneur in India.

It’s no joke being an entrepreneur in this country. Suddenly, the structure and the processes I had gotten used to were out of the window. Even though I wasn’t a big fan of my boss, it was disconcerting to have nobody to go to with my questions now. Having to start a brand from scratch, facing competition from the ever dominating and powerful international competitors, arranging initial capital, keeping track of accounts and taxes et all. These are the challenges that every first generation business person faces and to some extent, I expected to have my own tryst with them. But this article is not about them. This article is about the challenges which I could never have predicted. Let me take you through a few of them –I probably wouldn’t shy away from saying– they are very Indian. Allow me to cruise you through the story of my venture – Grapevine India Publishers Pvt Ltd.

The first thing I realized was that I had grossly underestimated the challenge of being a first generation entrepreneur in a market which is almost completely occupied by international players. I gave myself three months to learn the ropes and started traveling to every street, trying to tap the thriving unorganized market, where publishers/ distributors lived, only to realize that there are way too many streets like that in India.

We had to scale up and build a team. We are a talent driven company; if we don’t have good editors, our handicap is almost like a technology company not having enough technological capability. I had visited a few colleges to hire editors and marketing professionals. Two trends took me by surprise: firstly, their flawed understanding of the concept of a job and lack of proper skill set. And secondly, their unrealistically high expectations of salary and perks.

In June 2011, I started to look for an office. A broker told me there was this space in a village in North Delhi called Pandav Nagar which had everything I was asking for, which was: lots of space at a low rent. I reached this place and the board in front of the two storey building on a rather shabby road read: “Yaha par gaadi churana mana hai” (Translation: It’s not allowed to steal cars in this place).

We did take the place and started setting up the operations. In 2011, we applied for a list of International Standard Book Numbers (ISBN), which were supposed to reach our office in Pandav Nagar by government post in a week. Finally, after waiting for almost two months, we went to the post office to inquire about the letter. And clearly, the postman wanted ‘chai – pani’ to recognize our office as a valid address, and gave us a list of documents like Board Resolution and Rent Agreement which he needed before he could start delivering posts. I had no idea what had hit me. I wanted to be operational by now but I was struck with a fifty-year-old postman who wanted me to compromise on a very basic value I had set for myself.

In despondence, I tweeted my experience and asked for guidance. The advice was unanimous and I was introduced to the concept of actually using an RTI. Three days later, we had the letter in our hands. In August, 2013, after having spent two years there, we moved out of Pandav Nagar and took a bigger and prettier office. We got the interiors designed and had an exclusive pantry of our own.

We also needed a new watchman. And we hired Ram Narain. Ram is from Siwan District in Northern Jharkhand. Ram’s father never had much expectations from him. In Siwan, most people don’t study beyond the third grade and if a kid reaches adulthood without going to jail once, the kid is a good one.

Ram’s father’s dream was that his son goes onto become a security guard. The prerequisite to become one was to possess a licensed gun, which would cost rupees two lakh. He had to mortgage his field to buy the gun, which Ram brought to office every day. Owning a gun gave him assurance of a lifelong job as a security guard, and from his salary, he continues to pay a steady EMI to get his father’s fields back. Ram’s story is often a microcosm for rural India for me: It’s not he who brings the gun to office. It’s the gun who brings him to office.

So yeah, the roads will always be broken, the government processes will always be slow, people and promises would dither, the talent in colleges will always be substandard, criticism would be unsettling, policies of bureaucracy will always be unfavourable and the list would be definitely endless. This is the downside. And yes, they are exasperating. I cringe whenever I come face to face with any of these vexing limitations.

But then, let’s talk about the flip side. What happens when you get around these road blocks, really put your foot down and decide to become an entrepreneur? Trusted sources will tell you that the first thing an entrepreneur needs is an idea or an opportunity. And THAT is what India has in abundance. When an entrepreneur looks at his industry, he does not let the amount of work which has already happened before him overwhelm him. He sees the huge gaps which are still to be filled and the innovations that will always be welcomed. What looks like the darkest shade of red to an outsider looks like the bluest ocean to an entrepreneur with a vision.

“He became a millionaire overnight” and “he just cooked anything and it is selling like hot cakes” are oft heard lines from armchair critics. There are infinite hours of hard work behind every success story. We started as publishers of fiction – mostly commercial romances, which we extensively diversified at a later stage. Absolutely every book we released became ‘a national bestseller’ and many of our authors have become youth icons in their own right. Within a span of two years, we became India’s most frequented publisher in the Nielsen list of top selling 250 books in India.

And today, I can accurately pin down the avid dissatisfaction with my college placement as an MBA graduate– I was merely being a job seeker and not a job creator. I look at my team of ten in the office and know that their lives, sleep and pay cheques are hinged on my performance in any given month. I try to attend as many launch events as I can to share their happiness and my experiences. I feel the repercussions of my decisions across many families. I am supposed to take on the likes of Hachette and Harper Collins. I am doing work which is increasing the scope of the Indian market in a significant sector. And now when I look back, I know that I couldn’t have ever achieved this contentment, bond and sense of control anywhere otherwise.

Previous CSR: A case for Co-operate or Collective SR

Next The Roger Martin Interview 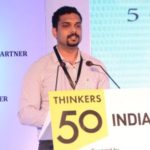 The author is a young author, entrepreneur and a sought after speaker at B-school events. Recognized as a distinguished alumnus of Delhi College of Engineering (now DTU) and an MBA graduate from MDI, Gurgaon, he is one of the highest selling authors in India, known for a strong connect with the youth of the country. 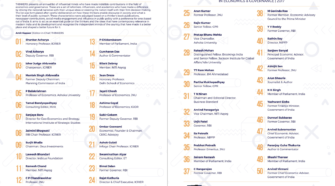