Capitalism has created enormous value for mankind and improved our quality of life. Now we need a better version of the system.

“A chapter in Bhagvad Gita says by merely abstaining from our duties and renunciation we will not be able to reach the perfection we desire.”

“It is naive to believe that the death of capitalism will rise the phoenix of a new economic system that will be rid of all evils.”

The world is lashing out at capitalism like never before. From being an accepted way of economic life and a harbinger of rapid growth and development, it is now being seen as a decadent system with little sense of social responsibility. While the hostility against capitalism has been simmering for quite a while now, the greed and lack of ethos of Wall Street has been amplified. The Occupy Wall Street movement in the U.S. and the subsequent Occupy protests around the world went on to highlight this dissent against the social and economic inequality, greed and corruption that crony capitalism has left in its wake. All over the world, wealth continues to get concentrated in the hands of a few, organizations privatize profits, losses are socialized, and there is very little consideration for social value.

The doomsday theory – truth or rhetoric?

Citing growing consumerism, widening inequality, unsustainable growth, irreparable damage to the environment and scandals that fly in the face of business ethics, doomsdayers are predicting capitalism’s fall and the rise of an alternative cleaner system. The dominant emotion is that profit maximization as the over-riding objective of corporations must give way to a more tempered down, inclusive and responsible growth model.

These failings are not just confined to the western world. Closer home, there are ample instances of meteoric growth of a handful of corporations that have not managed to have a positive rub off on the communities where they are present. On the contrary, they have often resulted in widening inequalities, creating unprecedented pressure on public infrastructure and other social discomforts. Arguments of growth and economic development (ostensibly for the benefit of all) are falling secondary to concerns like equality, environment preservation and protection of rights of people. And the organizations clearly aren’t doing enough to help ease social burdens. Take the case of Kingfisher Airlines – as the business plummeted,
the organization socialized its losses in the way of bad debts for lenders, unpaid taxes and salaries, loss of employment and sordid tales of mistreatment of people, by a wealthy management that has turned a deaf ear. In other cases, activists, communities and environmentalists have taken up cudgels against unfair land acquisition for private profit; illegal and excessive mining by private companies that cause ecological imbalance, among others.

These sentiments are a clear indicator of the older system not working. At the same time it will be naïve to believe that this brings us to the death of capitalism, from which will rise the phoenix of a new economic system that will be rid of all evils.

The ‘save-the-world-from-capitalism’ brigade offers several alternatives. Some give the example of state cooperative economies like Quebec Social Economy that features greater worker controlled enterprises and mutual-aid organizations. Or the often cited case of Andalusia in Spain founded on mutual aid and collectivism in economic activity. These are good examples of unique and successful experiments, but these are experiments at best. There are questions of scaling up and feasibility when you consider politically and socially diverse countries like India.

There’s also the curious case of Richard Branson, who after amassing great fortune, has linked forces with a few other like-minded wealth creators to coin ‘The plan B of capitalism’, a new ‘ethical-approach’ model of doing business. Is it a genuine attempt at reform or another ‘self-promotion’ attempt so that his enterprises continue to profit from the existing system? It is yet to be seen.

Then there are hybrid capitalism models or as they are called ‘new operating systems’. The names are many – Sustainable / Breakthrough / Creative Capitalism, and their objectives similar. In this context, John Mackey and Raj Sisodia’s ‘Conscious Capitalism’ merits a special mention that has demonstrated, albeit with a small group of organizations, that profit motive can co-exist with sound business ethics and social responsibility.

There is another alternate being proposed by India’s latest socio-political outfit Aam Admi Party (AAP) which believes in public opinion driven decision-making model. The question it evokes is whether in a chaotic democracy like India, can general public be entrusted to create equilibrium between social and economic growth and how do you balance direct democracy by the people with a capitalist economy run by private enterprise.

Finally, there are those that completely shun capitalism and advocate for equitable societies with minimum trade, and free of consumerism. Call them purists, escapists or whatever you like, and you would find many such examples in the Indian context. Left wing social activists, who are often anti-development championing the cause of social equality, ultimately end up widening inequality for the very people they set out to help.

The answers are not easy. We cannot go in reverse, for capitalism has created enormous value for mankind and improved quality of life across the board, all we need is a better version of the system.

So while we clearly can’t sound the death knell for capitalism, what is that other thing that we should be fighting for? What values should we be looking for in the new, evolved system? In our pursuit of a better version, will we end up succumbing to one of the ‘new operating systems’ propagated by erstwhile wealth creators who seem to have suddenly found their souls? Will we fall again into the trap of a new form of economic or political domination? And how much must we reform? Take the case of the new Corporate Social Responsibility rules introduced by the Ministry of Corporate Affairs, Government of India that mandates spending a percentage of profit earned by corporations on social development. Considering India’s gaping inequalities and dearth of resources for the development sector, this bill, which lets organizations self-audit and report, is laudable. But will such state-dictated reforms enable change or create more hindrance, needs to be seen.

Is an Indian Approach the Answer?

Like always, the Bhagvad Gita gives perspective on this complex issue. The Gita in its chapter on Karma Yoga says that by merely abstaining from our duties and renunciation, we will not be able to achieve the perfection we desire. At the same time, it mentions that leaders need to be driven by a bigger, greater purpose and responsibility over self or mere material gains. In the pre-recession era, B-schools of the west and influential thinkers had already started talking about this form of inclusive model, fashionably termed ‘Karma Capitalism.’ It was propagated then; it is time to act now.

As leaders of Indian organizations we don’t have to learn Karma Capitalism. Instead have to unlearn a few things, and invoke our heritage and cultural roots. Our ancient scriptures have taught us the importance of purpose beyond material gain, of treating the extended community like our own family, respecting and helping those that are marginalized and caring for our environment. The value of sacrifice or rather ‘take-some, give-some’ doesn’t make us weak or lessen our prosperity. It teaches us that we cannot grow in isolation; and when we treat the larger community as our own extension, everyone benefits together.

As India liberalized and opened its doors to the world, we adapted a lot of great working systems from the west. But in our race to get ahead, somewhere along the way, we left behind our ethos. Values like philanthropy, sustainable living, austerity, reusing and recycling resources are not new to us. In fact, the west is learning and imbibing these positives from us.

As stakeholders start demanding greater social roles and higher ethical standards from leaders and corporations, it is time for us to invoke our traditional Indian spirit of integrating social and economic value. The idealists can only guide us, the reformists can suggest alternatives, and the state can tell us when we go wrong. Ultimately, leaders will have to develop this value-based ecosystem in their organizations on their own if they want to last in the long haul.

However, for this to acquire scale, we need to re- look at our education system which has increasingly adopted western models. It is time to strengthen and give prominence to ‘value education’ and ‘moral science’ as part of our school curriculum. It
is also necessary to evolve their course material with complexities of today’s world and expand it to cover senior secondary classes. Only by ingraining the lessons from our scriptures from a young age, we will be able to churn out leaders with values and commitment to develop an eco-system of shared prosperity. Capitalism, interpreted and executed in this manner, may no longer be a bad word.

Next In Conversation with Mike Walsh 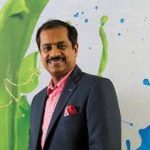 Sameer Nagpal is Managing Director and CEO of Shalimar Paints. He is one of India’s acknowledged business strategists and transformation leaders. He believes the combination of ethics and strategy can play an important role in driving social and economic value for all stakeholders. 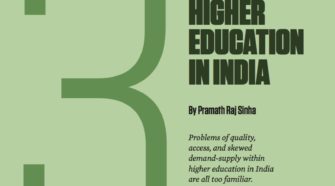