Keynote by Shri. Amitabh Kant at the India’s National Competitiveness Forum. He states that developing competitive spirits amongst Indian states is the single most way for India to progress.

Over the last 68 years, India has turned into a very complex, complicated and a difficult place to do business.

The only way India can improve is when we force all our states to compete and then measure their outcomes.

The challenge then is to grow at even higher rates over a long period of time to be able to lift the young population well above the poverty line.

Over the last 68 years, India has turned into a very complex, complicated and a difficult place to do business. The answer perhaps lies in thinking of how to do away with this inherent nature and make things easy and simple. The vast number of rules, regulations, procedures, laws, and acts built up over the years must be lessened to capture the opportunity that India is presented with currently. The implementation of the Goods and Services Tax and the Bankruptcy Law are clear indicators of our quest to make India a simpler economy worldwide. While on the path of achieving phenomenal progress, a huge challenge facing the country right now is to make our states easier in terms of doing business in, as it is the private sector that comes and invests in our states.

The only way India can improve is when we force all our states to compete and then measure their outcomes. It is not without measurement that India will be able to improve its performance. To inculcate this idea, an Ease of doing Business Index was developed in 2015 for the states. To this end, a huge sense of competition is created amongst the states by way of identifying and working towards different outcomes, and the states are then ranked. In the first year itself, we reached some of the most comprehensive inferences that helped states get better. Due to the creation of this framework, the states that have been mostly laggards for a long time thrived to make radical changes in labor and land laws to secure higher positions. Hence, developing competitive spirits amongst our states is the single most way for India to progress. The approach is not limited to ranking the states but also making the rankings available in public domain so that the well-performing states get recognized and the poor performing ones get a reality check. Further, as an upshot to the motive of making our states viable as per the best practices, the districts covering these states have also been targeted in the process. Accordingly, echoing the Prime Minister’s drive for a cleaner India, we now have the Ministry of Urban Development ranking various districts on cleanliness.

Another key challenge for India in growing at higher rates of 9-10% over the next three-decade period is to improve its education and health parameters. Looking at the latest NFHS data, one can clearly distinguish between states that are faring well and those which are not on certain parameters like infant mortality and maternal mortality. The findings henceforth can be directly correlated to the regional skew of our health infrastructure and manpower in terms of doctors and total bed density. Therefore, this is indicative of the mere fact that unless we transform our states, it is not possible for us to reap the benefits of the demographic transition and achieve social progress.

Over time, the country has successfully provided for access to education to all but it is the quality of education that has fallen considerably. For example, a class V student cannot read a class II English comprehension. The dropout rates at the elementary level and the pupil-teacher ratio sing the same song. We need to tackle these states and identify key problem areas. The objective is to project all the states and the districts on different parameters of health, education, infrastructure among others so that we get a perspective as to where they lie and where they need to move. As previously stated, unless we can transform these states, we cannot think of an India that we aspire to live in. It is not just about the states but also about the various districts that hold a key to India’s progress.

Every year, three states are picked up to rank and transform. However, only those that have the political and administrative will to transform themselves are the ones that get selected. The intent here must not be confused with just challenging these states and their districts to recognize their faults. The motive is also to handhold them and act as a facilitator in their growth stories.

We must go beyond ranking. The end objective is to put all the rankings in public and in every household to identify the states that are not delivering on the agenda of serving their citizens. It is indisputable that unless and until India takes a quantum jump in education, health, and nutrition, the key to India’s growth is lost.

Michael: What is the quality of data underlying your analysis of the Indian states? What all are the challenges to further improve upon the quality?

Amitabh: All the data points used are reliable and widely acceptable across the country. The main challenge here is to not measure our districts or states on a historical basis but to measure them on a delta basis i.e., how have they changed during the course of a year so that a base line is there and changes are tracked.

Michael: Is there a district or a state that has really surprised you in its performance?

Amitabh: My belief has always been that if we transform the seven states of North India and Eastern India then we have won the battle for India. However, there is a major challenge that lies in North India. Both the West of India and South of India do very well in terms of performance. It is the Northern part of India that has lacked governance and the administrative ability to deliver. These states must be brought to the forefront and improved upon.

Michael: Do you think that ranking is going to help drive that change?

Amitabh: We have to move beyond ranking to get the desired results. Once ranking is done, the task is to spread the word through media and other sources so that those who have not been delivering on their goals are brought in public and thence forced upon to undertake reforms.

Michael: What is the importance of having a composite index that reproduces results to track attention of media because it is the ranking that gets people interested to drive changes?

Amitabh: It is important to have a separate social index. No country can have economic development for a long period of time. It is not possible to achieve progress until there is a quantum jump in education, health and nutrition parameters. It is this that holds the key to India’s growth.

Previous Priorities for the Future

Next Economics and Governance 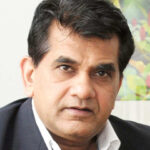 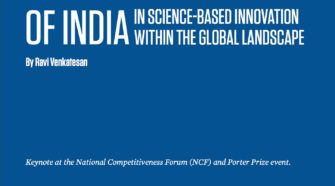