“If we are able to create emotional connections around people, we will be creating the right bonds and if we do so, we can expect the right outcomes to emerge by themselves.

“If we look at a country like Singapore, it has no energy, no water, no land, no food but only a port city and with this port we created a lot of solutions.”

Stephan Kraxner: Information Technology tools are becoming prevalent in urban configurations but technology alone will not provide all the answers. There’s a need and there are opportunities for new designs and approaches in urban development concepts and standards in order for resilient, livable, healthy and vibrant urban spaces to be created.  Design solution can minimize energy consumption and emission and at the same time they enable well-being and productivity. We need to see how we can design and create sustainable, livable and resilient cities in the near future.

Diego Soroa: I believe technology allows us to do great things and our cities are our reflection of our technologies. If we think of what drives technological innovation, we will obviously find economy, efficiency, productivity and comfort but there is no trace of humanity on that briefing.  There are no values, no sense of belonging and no community feelings.  The approach of modern urbanism with a creation of theme parks and museums is to confine the activities in specific spaces.  It is time, we free the activities and the feelings and the emotions to populate back our cities. It is time we incorporate what makes us human in the briefings for the technological innovations that we are demanding and requesting. There are a lot of people, creative people, and the creative class that is working precisely on those problems. It is not only about the aesthetics, it is about the outcome, because we believe if we create the right connections, we are going to create the right outcomes. If we are able to create emotional connections around people, we will be creating the right bonds and if we do so, we can expect the right outcomes to emerge by themselves. The exact same people, the exact same atoms; are just connected in a different more meaningful manner to have a completely different output.

Ghassan Hasbani: The urban population is increasing at a significant rate. The US in the 80’s reached the point of 70%; China by 2050 will reach that point. Different countries at different stages, for example, UK, France, Mexico, Brazil, etc., would reach that point at the turn of this century. The trend is almost irreversible as countries and economies develop. Some questions that we need to be addressing over the next 15, 30, and 40 years are: Is urbanization happening by having more people going to existing cities? Do we want it to be urbanization in really well developed cities in good environments and in competitive cities that have a role at the global stage or urbanization with the images of slums and poverty and lack of inclusion? In the next 30 years, humanity will develop more infrastructures than it developed in the last 4000 years as a lot of investment has to go into developing urban spaces and cities. How can it be achieved while maintaining a good environment, creating enough jobs in the cities, while diversifying the location of the cities so that we have enough decentralization in a certain economy to allow for balanced development across the country?

Steven E. Koonin: I am a scientist and I look at cities with a desire to measure and understand. The new technologies that we have can give us unprecedented views of cities with high granularity, high timeliness, high coverage and great variety. The Center for Urban Science and Progress (CUSP) at New York University is a government-academic private sector partnership which is focused on applying big data techniques to big cities particularly New York City. The underline thesis is that, if we can acquire, integrate and analyze all data; city records, sensor data from the sensors we all carry around, we can make the city government better, more efficient operations, sounder policies and better planning.  The citizens can be engaged in a better way with the government. We can help the private sector to do things since everyone wants to know what goes on in cities.

Firstly, we need to get the data standards in place. Beyond the physical infrastructure of communications whether wireless or fiber or sensors, we have to talk about the human and organizational infrastructure. Secondly, the most basic human urge is to hoard data.  The academics do it because its priority in publications, government agencies do it because its turf and power, and the private sector does it because it has got monetary value. We need to establish a culture where the data is shared between the government agencies and other stakeholders and one shares this data with appropriate restrictions. Thirdly, we need to set the privacy sorted out. Cities are built by people and for people and if we want to understand them, we have to study people. We need to know their mobility, economics, communications, health, nutrition, associations, and also have to respect people’s privacy. To create a public private academic partnership, we have to get the Intellectual Property (IP) sorted out. Finally, we need to educate people about data about the power and drawbacks of data.

Stephan Kraxner: Can you name one city in the emerging or developed world that has excelled in terms of the technology that they used for smart city?

Steven E. Koonin: Singapore and Barcelona. In the US, New York City and Chicago are starting to move very strongly in this direction. In New York City, compliance with housing enforcement has been greatly accelerated making sure people live in safe housing by combining data from multiple sources. Traffic management, safety and security, policing, have long used these things.

Stephan Kraxner: From your perspective what makes cities competitive and attractive?

Ghassan Hasbani: The first pillar to make a city competitive would be, regulations, and that refers to the rules that have been put in place to govern the operation of a city.  The level of flexibility, the ease of doing business in that city, the linkages to other cities, health and safety and other regulations that basically put the blueprint of how the city should be functioning.  For that to happen, it requires leadership at two levels, leadership at the national level to make sure that cities have enough autonomy to create this kind of set of rules. Long term vision to be able to de-centralize decision-making and provide the cities with ample opportunity to make decisions and changes to their regulatory framework. Secondly, leadership at the city level. It is quite important to have city councils or regional councils or authorities, local governments that can execute changes and create an environment that attract people and industry and plug the city into the global value chain in terms of ease of doing business, creating the right industries in that city and competing but not duplicating and replicating what other cities are doing. The second pillar is the hard connectivity i.e. the infrastructure, roads, urban transports, telecommunications infrastructure, etc., and all systems that connect the city together, that make the city accessible and all parts of the city or the urban space accessible because it’s very important to focus on accessibility rather than mobility.  We do not want to get people to move around too much in a country or in a given geography rather give them access to the grids that exist and create that local community movement. So accessibility better than mobility; better than building bigger roads between cities is to actually have access of local transport that makes the difference in competitiveness of cities. The third pillar is, about the soft connectivity. This is at the level of technological advancement and deployment of technology within these cities. The soft infrastructure, the applications that go in that city to provide better accessibility, movement, planning, monitoring and sensing of the various activities of the city. You could build the most wonderful technologically advanced, well connected and accessible inclusive city yet it is a city that does not have a soul that may attract people to do business but at the least whenever there is a small problem happening either economic or social, people will flea that city and go somewhere else unless there’s something that actually attracts them culturally. So, the soft connectivity of a city, the culture of the city, the events and activities that they place in that city, the character of that city is an important ingredient to make that city competitive and attractive; to make it sustainable; to make it livable and to make it a true community rather than simply a set of buildings, roads and telecom networks.

Stephan Kraxner: From your perspective what makes a city culturally attractive, as we want to attract entrepreneurs and innovative people.

Diego Soroa: If the basic infrastructure has been deployed then the creative class needs just a scenario in which whatever activities they are going to develop are legitimized. The basic thing is to understand what creative people need and what is the direction of the process. It is a bottom up process; self-organized process because out of the box happens out of the boss and self-organized is, the best organized. So we have to create the conditions conducive for these emerging processes to take place.

Stephan Kraxner: The influx of refugees can be a potential for cities. What would your advice to the government?

Jack Sim: Basically, the ultimate competitiveness of a person, a city or a country is its virtues.  If we create human virtues, we will have attractive city, have life in the home, and have solutions that are not so confrontational. We should facilitate to make things better for others and then let them choose rather than impose on them, grab from them and become very selfish. Internet is going to give us the chance to be more feminine and more caring like a mother.  If we think about the refugee situation, this is an economic opportunity, this is people. The globalization can be transferred in the refugee situation where you are thinking these are people who are actually coming to contribute wealth to my nation. People need to be unleashed of their good work ethics and their spirit of enterprise.  So, if we are able to create this kind of mindset, then we start to see value in all human beings and start to let them create their own solution by facilitating.

Stephan Kraxner: What technology and data solution can be adapted in the current situation in these countries?

Steven E. Koonin Technology by itself is not a solution, and the real problems are the higher-level social issues that were just articulated. The refugees are not so different than the problem of the very poor in many cities whether it’s the undocumented immigrants in the US or the poor people in India, etc. The first thing to do is to give access and understand city services involving health, housing, mobility, and communication.

Next In Conversation with Prasad Kaipa 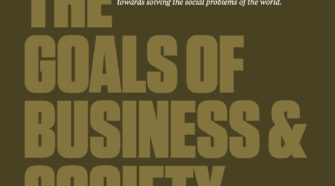