The Future of Pandemics and Seven Cocooning Aftershocks

The word “governance” has a lot of currency, but it is often indiscriminately flung around. There are attempted definitions of governance emanating from international organizations. World Bank also tries to measure how different countries do in terms of governance, which is desirable, but these measurements should be looked at with a certain level of skepticism.

Governments are like oxygen. Citizens do not measure it, but if it does not exist or if bad governance exists, the citizens realize it the same way we realize when polluted air exists. However, the history of the way oxygen was discovered is that it was first discovered by Carl Wilhelm Scheele and Joseph Priestley and subsequently named thereafter by Lavoisier. In the case of governments, the expression was coined first and now we are trying to measure it. Nevertheless, we ought to try and measure it.

The broader definition of governance also involves the behaviour of citizens and communities, and that is why governance as a notion transcends that of government.

There are two kinds of problems with cross-country surveys. The first kind of problem is, sometimes they are based on subjective responses to questionnaires. There are multiple problems with subjective response to questionnaires apart from the fact that that the respondent who is responding in India is not familiar with residing in all the other 192 countries of the world that one is trying to rank. So, there are problems of subjectivity.

Once upon a time, data on India and particularly data on Indian states was somewhat difficult to get. Now, data on Indian states are easier to get, which has enabled everyone to rank India’s states in terms of how they perform on governance. However, on the pretext of measuring governance, studies look at some standard economic indicators, indicators on social sectors, indicators on law, put weights to each of these variables and aggregate it to come up with an index that tells which states are badly governed and which states are well governed. But all these indicators tell nothing about governance. All these attempts to measure governance has not really been very useful in terms of adding value.

If self-regulation on the part of the community, on the part of individuals had existed, there would not have been a need for the heavy hand of government to step in and fill the breach.

One of the best reports of India’s performance in corruption is by Centre for Media Studies (CMS). Its timeline on corruption across India states shows that corruption has been declining. Interestingly, irrespective of the state, corruption as measured by CMS declines a little bit more in urban areas and semi-urban areas than in rural areas. It is because of the citizens and the countervailing pressure exercised by them.

Better governance being driven by citizens has increased in importance since the second half of the ‘80s and even more so in the last 10 or 15 years, and inevitably it is concentrated in urban areas, semi-urban areas and in some states rather than others. So, if we look at that broader definition of governance which transcends government, we can see the states are becoming better governed because citizens are becoming interested in the states.

There is another issue to remember. There is an absolute and an increment, and the two can often give different results. A state that was badly governed 30 years ago will probably still be relatively badly governed today, but it is perfectly possible that the increment, the improvement in that state has been faster. It is just that the distance on the base from which it started was too much. So, when looking at such rankings, what one finds differs enormously across states depending on whether you are talking about the increment or the absolute base.

With regards to the government part of it, there is a long list of public goods and services that people expect the government to deliver. Except for national security and state-level security, most of the other public goods and services is delivered by the third tier of government, the Panchayats and the urban local bodies. Hence, the real value addition will come when we begin to zero in on the local bodies. In terms of expectations about what the local bodies should do, there is a huge lack of capacity, not only in terms of the executive, the civil services which deliver at the level of the urban local body level and the Panchayat.

Unfortunately, the sufficient amount of decentralization and fiscal devolution is not happening within the states to the level of the local bodies. So, admittedly the citizen countervailing pressure is not enough, but to the extent it exists, it demands that the local bodies deliver better governance. Therefore, the demand side pressure comes but the supply side pressure will come only when there is decentralization within the state. After all, several of these public goods require public resources and fiscal devolution.

Finally, when talking about cities, the municipal level, we need to recognize that there is a great deal of multiplicity of authorities. We also need to recognize that when we complain about bad governance in Indian cities at that subjective level, we are sometimes talking about the growth that is happening just outside the strict municipal limits. Also, the fastest growth and urbanization in India has been in the census towns, just beyond the municipal area, which have urbanized, and who is supposed to deliver governance in these census towns which have transcended the Panchayat and yet do not have municipalities is beyond my knowledge.

Next Capitalism is inherently moral

States of India, their ranking considerations and the role of government. 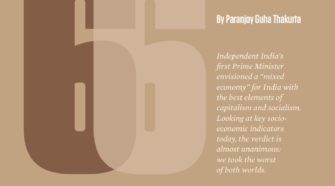